Over on Reddit, there was a recent tongue-in-cheek post about a painting (displayed below) about how pizza delivery began earlier than we think it did (and was much more classy than in the modern world). Because of the research I'm doing for my next novel, I was especially interested in the painting and wanted to know more about it.

It turns out that the painting in question is by Italian Renaissance artist, Masaccio, who, according to the great art biographer Vasari, "was the best painter of his generation because of his skill at recreating lifelike figures and movements as well as a convincing sense of three-dimensionality." He died at 26 but left us many beautiful paintings that depict much of the Quattrocento period of the Italian Renaissance. He was especially notable because he was the first to use the vanishing point in his paintings, which changed art forever. 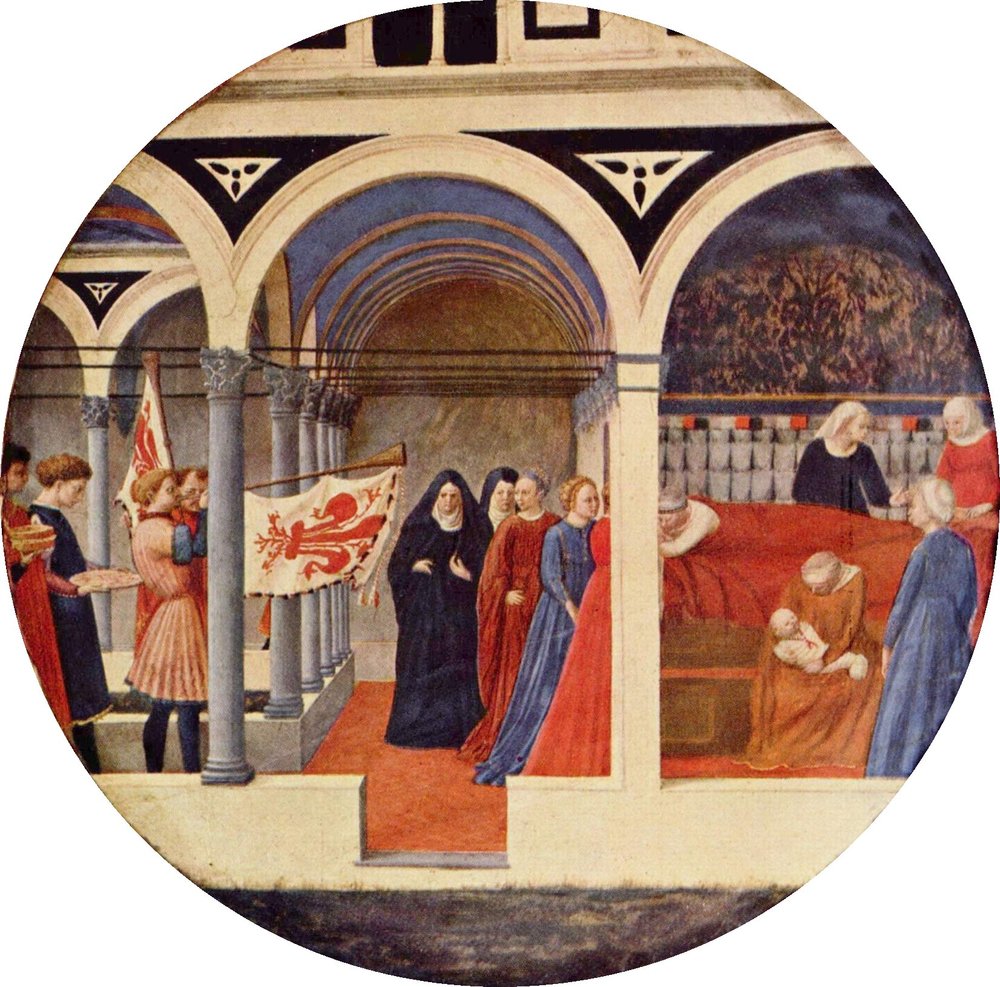 The title of the painting is Desco da parto.  A desco da parto was a ceremonial tray given on the occasion of a successful birth--the operative word there being "successful" since so many births at that time weren't. The tray was used for bringing food for the convalescing woman. While you could apparently buy wooden birth trays fairly easily at markets at the time, in this case the tray was likely commissioned and decorated on both sides by a master artist. 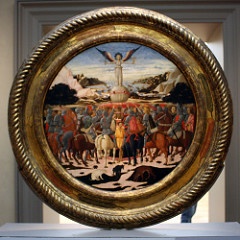 The painting gives us a rare scene of childbirth that wasn't of the Virgin. It's possible it was commissioned by and depicts the birth of someone of the Medici family.

So no, there is no pizza in the painting at all. Just an expensive and elaborate tray with a bit of food on it.

As for the pizza aspect of the whole discussion, it was fairly improbable to start with. Pizza as we know it didn't come into its own until the 19th century. Flatbreads with toppings had been around for thousands of years in ancient Rome, Greece and other areas. By the time of the Quattrocento cooks began to create concoctions that were more similar to what we know of as a pizza but they were very sweet.  Red sauce wasn't common as the Italians didn't use tomatoes--as part of the nightshade family, they were thought to be poisonous.

However, they did start to call them pizzas and the foundation was being set by cooks such as Renaissance chef Bartolomeo Scappi. He includes several recipes for simple, "flaky pizzas" in his Opera, a cookbook containing thousands of recipes. The pizzas range from what we might think of as flaky pastries and donuts, to something that seems like it might be akin to what we know of as a Dutch Baby. There is one, however, that begins to make the use of cheese:

Get two pounds of fine flour and make up a dough with six ounces of Parmesan cheese that has been ground in a mortar, moistened with a fat broth and rosewater and strained; add in three ounces of sugar, six egg yolks, three ounces of breadcrumb soaked in a fat broth, half an ounce of cinnamon and half an ounce of cloves and nutmeg together. Knead the dough for an hour and make a thin sheet of it. Brush melted butter on it and make a twist of it with the sheet rolled in four layers lengthwise; brush it with melted butter that is not too hot. With that twist make several small cakes, fry them in butter or rendered fat and bake them in an oven in a tourte pan just as twists are done. Serve them hot with sugar over them.

Eventually these sweet pizzas gave way to what we know of as pizza, but not until much later on, in the 18th and 19th centuries. Peasants were the first to try tomatoes and once they realized it wouldn't kill them, they began eating them on bread, and then it likely wasn't much more time before red sauce, cheese and meat toppings followed.

While I'm waiting to hear back from agents who have my manuscript, Feast of Sorrow, I've started researching my next novel.