One of the challenges of learning a language is understanding how to best use all the vocabulary terms that you are learning. It's one thing to learn a word, but quite another to know how to employ that word in a sentence.
I think this is one of the most challenging things for me when I am trying to learn on my own, without my tutors available. Take the word impiegare, for example. It means to employ, to engage or to use. But I'm not entirely sure how it's used in a sentence and when I turn to various resources I get conflicting answers.

WordReference (and the Collins dictionary) say that: 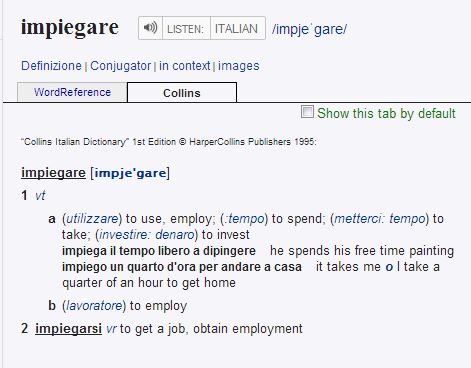 But if I try to test the above in Google Translate I get something completely different.

I'm sure that both phrases are correct, but which is more common? I suspect the latter. But short of asking someone who speaks Italian, I'm left to guess.

Google is also blasted a lot for being wrong so I don't rely on it much but it is helpful to test when I'm writing sentences or conjugating.

But there is a great tool I discovered recently, after I had already shared my top 5 tools for learning a language. It's called the Tatoeba Project, which helps language learners discover examples of words used in context. I was very pleased to find this particular site because I think in many instances it will help me understand word usage much better. However, in some, as in the case of impiegare, it's not entirely helpful.  Tatoeba relies on crowd sourcing and individuals to share knowledge, so you have to rely on the wisdom (or lack thereof ) of others.

This is what I found when I put the word into search in Tatoeba:

There were 64 results, and most of them were similar. Only one gave me an example of the VERB impiegare  in the context of spending time to do something. Instead I learned something else, which fortunately proved to be valuable.  All of those results were of the NOUN impiego, which means employment or job. And if most of those 64 results were about the noun, then I can infer that using impiegare in other ways may not be as common as a verb such as trascorrere which can also mean to spend or pass time. It also gave me a bunch of possibilities of how to use the noun when talking about jobs or job hunting.

In short, I will still need the advice of a native speaker on this one to be sure how to best use impiegare (or the similar reflexive verb impiegarsi), but using Tatoeba gave me some very valuable information that will help inform how/if I will use the verb, at least while I'm still learning. Give it a whirl. As a language learner you may find it very useful! 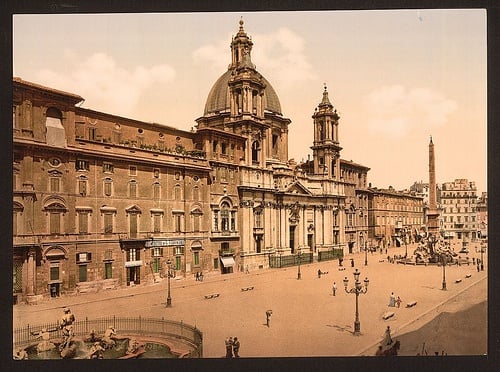 Learning Italian isn't something that I decided to do when I was young, but I wish I had! Instead, when I was in high school, many many years ago, I thought it would be...

I've been learning Italian for the better part of the last fifteen years. It's a lot of work and not so easy doing it as an adult. But when I'm in Italy I can converse...