Bartolomeo Scappi, Renaissance Italian celebrity chef and subject of my novel, THE CHEF'S SECRET, doesn't mention sweet potatoes or potatoes in his vast 1570 cookbook, but he mentions turkey, Muscovy duck, and guinea pig, all foods from the New World. And while the potato might have been considered exotic, it was also lowly, as a root in the ground. Root vegetables such as turnips were foods for peasants, and the idea of a nobleman eating a root from the ground was not a popular one. Which is a shame, because I like to think that if Bartolomeo knew about their potential, that he could have popularized them throughout Italy centuries before they began growing them as crops in the regions of Lazio, Puglia, Sicily and Veneto. In general, I think Scappi would love Thanksgiving as a whole--his cookbooks describe many dishes we eat during the holiday today, including the first recipes for turkey, and even pumpkin pie!

Sweet potatoes, in fact, lend themselves perfectly to all the spices and flavors that Scappi loved. I'm not entirely sure what he would think of them having a crust of marshmallows on top, but I do think he would be partial to my husband's Renaissance-style version of roasted sweet potatoes--the spice combination is straight out of Scappi's repertoire. 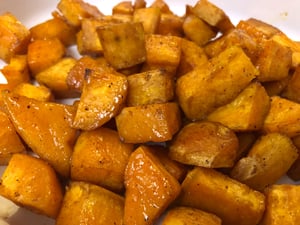 And want to try even more Renaissance dishes? Join my mailing list for your free copy of dozens of recipes!