Back to blog
Th 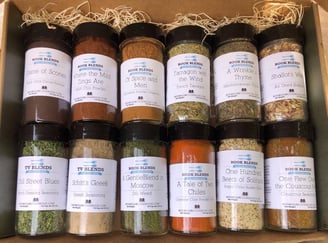 is fantastic recipe is part of the Book Club Cookbook Blends Bash I jumped at the chance. If you aren't familiar with The Book Club Cookbook's Book, Song and Movie Blends, you are in for a treat. Their spice blends are high quality and super punny too. They make great gifts for any book, movie or music lover.
The blend that I used for this particular recipe is Of Spice and Men, a superior Indonesian Korintje Cinnamon. 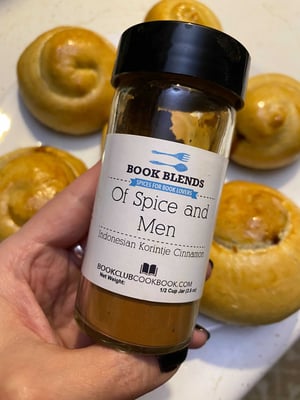 One of the best things about writing THE CHEF'S SECRET was the research, and in particular, cooking some of the 500-year old Renaissance periodization recipes I describe in the novel. And there were a lot of recipes I could try! In fact, there are over 1000 recipes in famous chef Bartolomeo Scappi's 1570 cookbook. In it we find a number of sweets, especially pies and pastries, including this rather complex and super delicious fruit-filled twist.
Scappi's instructions seem to indicate the pastry was one massive fruity cinnamon roll of sorts that was probably sliced up for guests. I played around with it, making a big pastry that could be cut apart, but also experimenting with individual sizes. In the end, I halved the recipe for this version, which makes eight individual pastries.
The dough on this is not as flakey as some of the modern pastries of today, and is best eaten within a day or two, although you can freeze extra pastries and heat them up in the microwave or oven.
The original recipe calls for a leaven, which is how cooks for centuries made bread before commercially available yeast. Sourdough starter discard is perfect for use in this recipe. If you don't have a sourdough starter and want to start one, King Arthur Flour has both a recipe to start your own, or you can also buy a starter directly from them in their shop.  Before you use your starter to make the levain, make sure you feed it at least twice the day before you attempt this recipe--it helps with flavor and how the bread rises.

If you make this dish, I'd love to know how it tasted! Tag me @crystallyn on Twitter or @crystallyn14 on Instagram and share your photos online with the hashtag #TheChefsSecret.